Upon a Starry Night Portfolio

In Development Upon A Starry Night Genre: Family, Magical Realism The adventure begins when, after falling asleep during the reading of a story, a poverty stricken little girl and her brother are invited to the magical Christmas Town their mother […] 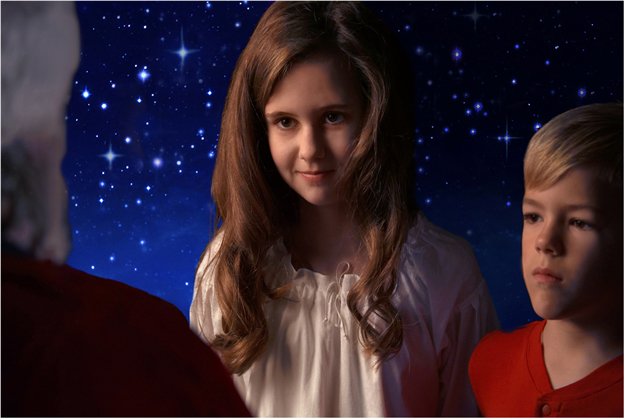 Upon A Starry Night

The adventure begins when, after falling asleep during the reading of a story, a poverty stricken little girl and her brother are invited to the magical Christmas Town their mother had been reading to them about. They are filled with awe at the sights they see.

During their visit the two little children are asked to make a big decision. What they surprisingly choose, activates a whole series of unexpected events, opening their awareness to what it means to be part of the beautiful, diverse human race.

A beautifully, entertaining, eclectically spiritual, healing film for all ages.

Scroll to the bottom of this page for Trailer.

Why This Film Is Important

We live at a pivotal time in history. Major changes need to take place for humanity.

There is tremendous power in story. What we watch day in and day out, can elevate our consciousness, or dumb us down. Most of our entertainment dumbs us down, at best. People have become complacent regarding what they watch, because they see it as an escape from everything going on, not recognizing that it is part of what is creating the problems they are trying to escape from. We are oblivious to the fact that what we watch every day affects our thinking, our being, as much as what we eat every day affects our body. We realize that if we ate sugar and junk food all day long, it would affect our physical health, but we don’t want to recognize that watching junk entertainment every day will affect our mental, emotional and spiritual health. Advertisers spend millions on a 30-second super bowl commercial, and they wouldn’t do it if it didn’t influence people to do what they wanted them to do.

In this new film, the protagonist, Peter Rabbit, the sweet bunny kids relate to and love in the story, after trashing his neighbor’s house decides to murder him, because he is getting in the way of his ransacking fun. Peter overhears that the man has a deadly blackberry allergy. What does the audience’s sweet fuzzy friend do next? He plans to kill this man by putting him into anaphylactic shock! He pulls out a slingshot and aims for the mouth, finally getting a blackberry in. The poor man collapses, but pulls out his EpiPen, ramming it into his thigh on his way down, before losing consciousness, and barely saves himself.

In light of the school shootings, and everything else going on in the world, what child needs to be taught “kill thy neighbor”?…If allergic Tommy has been irritating you at school, throw a little peanut into his sandwich, that’ll take care of it. The horrific stories of kids gasping and dying in their parent’s arms from these allergies had me in disbelief of what I just saw on the screen.

Richard Brody of The New Yorker says” I agree that the scene spotlights an unpleasant insensitivity, even an ugly obliviousness, on the part of the filmmakers.” Then, later these ill-informed filmmakers think they can throw in a moral to the story, when at the very end, they all become friends, just like that. Richard Brody addresses this as well, “Its mechanistic moralism, seemingly distilled from screenwriting classes and studio notes, is the sort that marks so many movies now—ones for adults as well as those for children—imparting values in the form of equation-like talking points, which prepare viewers not for life but for more, and similarly narrow, viewing.”

So, here’s the crux, in order to write and produce films that will truly start elevating our awareness, the filmmakers need to have already raised their own, and it’s a long process. We need people with higher consciousness producing our media.

Things are very, very wrong right now. Think about it, the way it stands, the lowest of the low are most often in the highest leadership positions. The most ignorant, at best, creating most of our entertainment, stories that feed our soul, and teach us about life. It’s high-time for a radical change. The people with the worst character traits, the lowest in consciousness, are in the most influential positions on the planet, and because of this the things we have become numb to or are accepting as ok, are mind-boggling. If this continues, the world is lost.

On the bright side, more people are starting to feel something is wrong and are seeking deeper meaning and an eclectic spirituality, I was interested in this my whole life. After a long transformative, often beautiful often painful journey, my powerful awakening came during a group sound healing session at a Qigong retreat, surrounded by people fighting for their lives from diseases deemed fatal. There, I had a powerful third-eye opening that has changed my life forever, because during this awakening, I received a direct call to do what I am embarking on now, to help with the healing of the planet through story and film. It birthed the conscious media movement and my new films. Though it did take a couple of years to digest, understand and integrate what I saw and experienced that night, along with the several months that followed. I now feel ready.

Documentaries try to raise our awareness, but it’s mostly people already on a path of growth who are drawn to those. It’s the daily programs and films, especially the fiction narrative stories that we need to transform and greatly raise the bar on.

In the practice of Qigong, the concept is that everything is energy. There is solid energy we can touch and unseen energy connecting everything that is. Story has energy to it, and used correctly, it can heal.

There is the issue that the architects of this type of media need to possess that wisdom factor, plus it requires more effort to make an entertaining film not using cheap tricks and jokes (most already used over and over in other films), or to not throw in things strictly for shock value.

To get on the path to healing humanity through Conscious Media, 4 things need to happen right off.
1) We need wise, intelligent, highly conscious people producing our media.

2) Story is supposed to reflect life and yet women’s voices have been forced out of storytelling/filmmaking. (and it’s not because we haven’t been knocking at the doors trying to get in). As it stands, only 4 to 7% of the films have female directors. What a distorted world view that presents, even the chickflicks are directed by men, telling us how we should feel and behave. Please read: https://www.consciousmediamovement.org/single-post/2016/08/25/Men-Telling-Womens-Stories

3) For this same reason there, needs to be ethnic, religious diversity…in order to reflect real life, and share those voices and perspectives.

4) We are throwing away another one of our best resources. In Native American culture, it was the wise elder who passed down their wisdom to the next generation through story. Nothing compares to lessons learned while living. Now we throw away that great resource by throwing anyone away over 40, especially if they are a woman, and that’s when we really get to a place where we have so much more understanding to contribute. There needs to be a balance of brilliant youth and wise elders in storytelling. How can the world not be out of equilibrium, with so many of its citizens not being allowed to contribute?

With Upon a Starry Night, I have created a beautifully, entertaining, transformational film that will help in the healing of the planet. It will be a baby step at first, but it can be the beginning of a great shift in storytelling, and values. Wise women and wise men, being called to the fore.

Of course, as soon as multi-genre, transformational media becomes popular, many will try to copycat what’s being done, because they see profit in it. There will be a lot of pseudo transformational media out there. However, one can’t create something with something one doesn’t possess. Authentic transformational films will feel noticeably different to audiences, even remotely open enough to sense it, those films will standout by the incredible feelings, openings and healing they start to activate.

Upon a Starry Night is the beginning of a dramatic shift in entertainment.